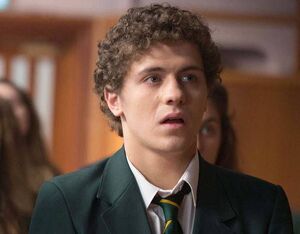 James Z Maguire is a main character in Derry Girls. He is played by Dylan Llewellyn.

James is the cousin of Michelle Mallon. He is the son of her Aunt Kathy, who traveled to England to have an abortion; instead, she chose to keep the pregnancy, resulting in James' birth. James moved to Derry with his mother Kathy before the start of season 1, when he was 15 years old.

James began to attend Our Lady Immaculate College, an all-girls school, and is the first (and so far, only) male to do so. He did not attend the local boys’ school for fear he would be harassed due to being English. On his first day of school, his mother moved back to London without his knowledge, leaving him in the care of his aunt.

James is not used to life in Northern Ireland and has found it difficult to adjust. He is often the butt of jokes, made mainly by his cousin Michelle. James is a polite, awkward teenage boy that is slowly emotionally toughening up, and is beginning to bite back against teasing.

James does not like fish and chips, saying the smell makes him feel sick. He admirers the boy band Take That, specifically Gary Barlow's skills as a songwriter. He dislikes how people in Derry use the term "wee" to describe things that aren't always small.

James had a short romantic relationship with Katya, a visitor from Ukraine, in Season 1, Episode 4. He took Erin to prom after her original date did not arrive; he missed his Doctor Who convention for this.

He appears in all episodes of seasons 1 and 2 and will return for season 3.

"There is no gay thing!"

"I support gays, even though I myself am not actually gay."

"Well, how do things work here? How do they work? Will one of you please explain it to me because sometimes I feel like I've gone through the fucking looking glass."

"This isn't windolene, this is mayonnaise."

There's a mural of the Derry Girls, in Derry, featuring Dylan Llewellyn as the Wee English Fella.

According to Nicola Coughlan, the people of Derry favour his character the most; residents also showed much concern while the mural was being painted, questioning where he was in the mural, as James was one of the last characters to be painted.

Lisa McGee revealed on Twitter that James' middle name is "Z", because his mother liked the idea of the middle initial Z, but couldn't think of any names that started with that letter.